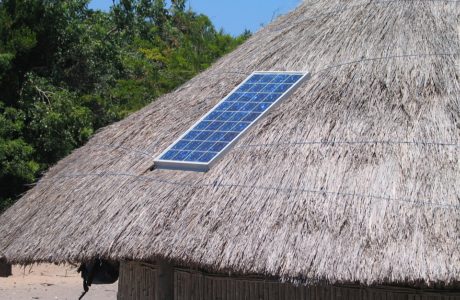 Rooftop solar is spreading as its cost falls, driven by incentives to accelerate growth, economies of scale in manufacturing, and advances in photovoltaic technology.

What do these numbers mean?

Our analysis assumes rooftop solar PV can grow from .4 percent of electricity generation globally to 7 percent by 2050. That growth can avoid 24.6 gigatons of emissions. We assume an implementation cost of $1,883 per kilowatt, dropping to $627 per kilowatt by 2050. Over three decades, the technology could save $3.4 trillion in home energy costs.

Rooftop solar is spreading as its cost falls, driven by incentives to accelerate growth, economies of scale in manufacturing, and advances in photovoltaic technology.

19th-century solar panels were made of selenium. Today, photovoltaic (PV) panels use thin wafers of silicon crystal. As photons strike them, they knock electrons loose and produce an electrical circuit. These subatomic particles are the only moving parts in a solar panel, which requires no fuel and produces clean energy.

Rooftop solar is spreading as the cost of panels falls, driven by incentives to accelerate growth, economies of scale in manufacturing, and advances in PV technology. Innovative end-user financing, such as third-party ownership arrangements, have helped mainstream its use. Yet, costs associated with acquisition and installation can be half the cost of a rooftop system and have not seen the same dip.

In grid-connected areas, rooftop panels can put electricity production in the hands of households. In rural parts of low-income countries, they can leapfrog the need for large-scale, centralized power grids, and accelerate access to affordable, clean electricity—becoming a powerful tool for eliminating poverty. 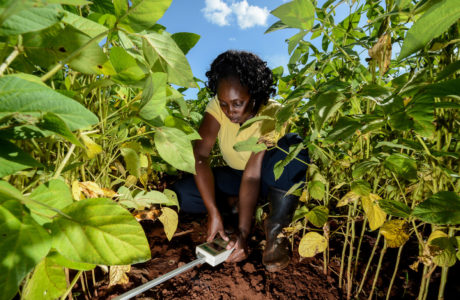 What do these numbers mean?

Based on historic growth on large farming operations, our analysis projects the total area under conservation agriculture will continue growing from 177 million acres to peak at 1 billion acres by 2035. We assume that as regenerative agriculture becomes more widely used, farms that have already adopted conservation agriculture will convert to these more effective soil fertility practices in response to consumer demand for fewer harmful herbicides. The benefits of that conversion are counted by the regenerative agriculture solution. Nonetheless, conservation agriculture offers significant benefits in the interim, reducing carbon dioxide emissions by 17.4 gigatons based on average carbon sequestration rates of .15 to .25 tons of carbon per acre per year, depending on region. Implementation costs are low at $38 billion with a return of $2.1 trillion.

Plows are absent on farms practicing conservation agriculture, and for good reason. When farmers till their fields to destroy weeds and fold in fertilizer, water in the freshly turned soil evaporates. Soil itself can be blown or washed away and carbon held within it released into the atmosphere. Tilling can make a field nutrient poor and less life-giving.

Conservation agriculture was developed in Brazil and Argentina in the 1970s, and adheres to three core principles:

The Latin root of conserve means “to keep together.” Conservation agriculture abides by these principles to keep the soil together as a living ecosystem that enables food production and helps redress climate change.

Conservation agriculture sequesters a relatively small amount of carbon—an average of half a ton per acre. But given the prevalence of annual cropping around the world, those tons add up. Because conservation agriculture makes land more resilient to climate-related events such as long droughts and heavy downpours, it is doubly valuable in a warming world.